The History of Victory Gardens

Gardening for the Common Good – A History of Victory Gardens

As Memorial Day weekend approaches, we prepare to honor those who made the ultimate sacrifice for our country. We’ll participate in parades and 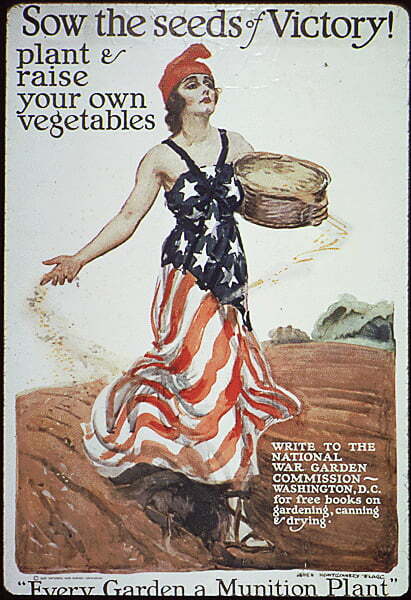 ceremonies, display flags and host gatherings with friends and family, all to celebrate our collective patriotism.

But did you know that there was a time in American history when gardening was considered an act of patriotism?

Throughout both World Wars, food shortages were common as priorities shifted to support the war efforts. During this time, the federal government urged citizens to use any available land to grow their own fruits and vegetables. The “Victory Garden” campaign served to boost morale, express patriotism, and safeguard against food shortages on the home front.

Americans began to plant food wherever they found space at home: in small flower boxes, on apartment rooftops, or in their yards. Gardens were planted in school yards, at churches, public parks, at private businesses, and deserted lots of any size. Eleanor Roosevelt even planted a victory garden on the White House lawn.

Various government agencies and seed companies worked together to provide land, instruction, and seeds for individuals and communities to grow food. Gardeners were encouraged to plant vegetables that wouldn’t take up too much space and could be easily stored or canned, such as lettuce, cabbage, beets, kale, squash, carrots, and tomatoes. Soybeans doesn’t require much room, and were an acceptable protein substitute when meat was rationed.

Through government-sponsored pamphlets, citizens were taught the benefits of succession planting (seeding crops at intervals of 7 to 21 days in order to maintain a consistent supply of harvestable produce throughout the season) to maximize their harvest. They were advised to record the germination rates of seeds, along with any diseases or insects they may have encountered, to help reduce waste and improve their garden’s output the following year. Through the combined efforts of the government, community leaders, and private citizens, millions of victory gardens in all shapes and sizes were able to produce abundant food for the people at home.

Although the government stopped promoting victory gardens after the World Wars ended, in recent years, there has been a movement toward self-sufficiency and eating seasonally to improve health through local, organic farming and sustainable agriculture. Today, we see the victory garden’s influence in homesteaders who want to become more self-sufficient and in urban community gardens where people gather to grow healthy food.

With the advancement in modern technology, gardening at home is much easier now. Grow lights make it easy to start plants indoors (or grow them entirely indoors!). We can easily freeze or dehydrate our food to enjoy throughout the year, in addition to traditional canning, pickling, and preserving.

Hopefully, the history of the victory garden inspires you to start your own garden! It’s a great way to get out in the fresh air, connect with nature, exercise, and relax, all while providing fresh, healthy food for your family.

Nature's Lawn & Garden Inc. has been serving customers for over 40+ years. We provide professional advice as well as high quality, easy to use, DIY products for natural lawn and garden care, for customers all over North America.
8 Reasons to Start Gardening Now 2022 Father’s Day Gift Ideas

Let’s Get You That EBook!